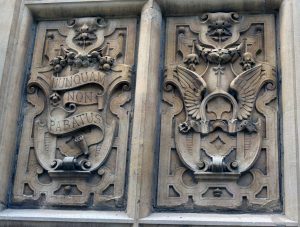 Stonework panels from the front of the house. Nunquam non Parabat (Never Unprepared) is the motto of the Johnston(e) Clan.

First mentioned in Dulwich records as Kingswood Coppice (1576). William Vizard built a Lodge here between 1811 & 1814. It was re-built as Kingswood House in the late 1800s by John Lawson Johnston & was then known as Bovril Castle. In 1919 Sir William Vestey took up residence & when he was made a Lord, took the title Baron Vestey of Kingswood, a title still held by the family.

Residents of Dulwich remember having school picnics in the grounds; & Dorothy Jones, a daughter of the head groundsman, worked in the House as an under parlour maid to Lady Vestey. She remembered serving at table & peeling an orange each morning for the Lady’s early morning tea. If a member of staff married, celebrations would take place at the House & a good time would be had by all.